Given my affinity for The Twilight Zone, I wanted to have a “golden set” that we knew would always be available. This lead me to searching around online for the best possible quality I could find to use as source material. This turned out to be a complete collection of all 5 seasons on Blu-ray. I picked up a previously owned copy on eBay and it showed up about a week later. For most, this is where the story would end now that they had their own set in their collection. For me though, discs are a no go. I want the entire library in our Plex library so I can watch it on any device and with no DRM. This meant it was time to start ripping and encoding. Here is the process I went through to create my golden set..

Side Note: I did this all on a Mac, but both the hardware and software exist on Windows as well if that is your platform of choice.

I broke the process into 4 steps

This is technically optional, but I did it for two reasons. One, I wanted backups of the discs in case something happens to them. And two, I wanted to work on everything from a local drive instead of messing with discs and waiting for the drive to spin up. I use MakeMKV for this. Simply pop in the disc, and select Backup Disc in MakeMKV, and wait!

I used MakeMKV for this also. Open the media backup file that was created in step 1. MakeMKV will scan the file and display the episode files within the file. Export these to your drive so you have each episode as a separate .mkv file.

.mkv files are playable by a lot of systems, but I wanted them to be more universal so I went with conversion to .mp4 files. This also makes applying metadata easier in the next step. I used Permute to convert from .mkv files to .mp4 files. This software is not on Windows, but Windows has a ton of options for this.

Although the video files are fully playable, it’s nice to have all the episode titles, descriptions, cover art and so forth for when you view the files in a media player like Plex. MetaZ is a fantastic piece of software to do this. You drag in your .mp4 files, update the metadata and click write. Done. The program will churn for a bit and then poof, you have your new file in all its metadata glory. 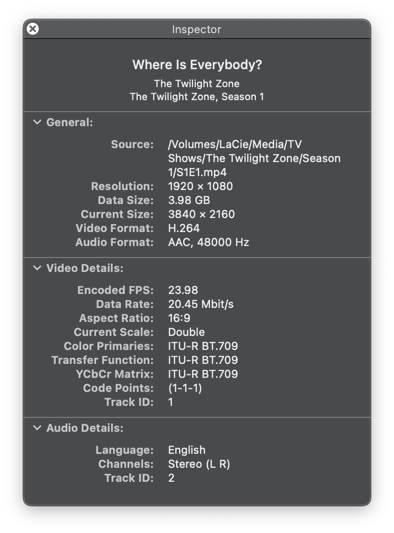