It was an unassuming building, on the corner of two streets that didn't stand out for any particular reason. There was a single illuminated sign to the left of the entrance door that simply had 3 Japanese characters. Nothing about the front door felt like the correct door to enter the restaurant, but we tried it, and fortunately it was indeed the correct door. Upon opening the manual sliding wooden door, we were greeted by a man who we would later learn to be the owner and head chef. Shortly after he greeted us, we also learned he spoke fluent English. It was a very inviting atmosphere and we soon found we were in for one amazing experience!

The chef’s name is Toshiya Ohnishi and, he lives above the restaurant with his family. I believe he took on the restaurant from his father, who started the restaurant. Toshiya-san walked us through the menu and how ordering worked. When ordering, you can choose the Omakase (chef's recommendation) in several tiers. The tiers are broken up by price. With each increased tier, the food courses remain the same, but the quality of the fish increased.

You can also order à la carte, but we decided we had to do the chef recommendation and expand our sushi world! We chose the ¥20,000 tier and got ready for what would become one of the most amazing experiences of my life!

The chef was also very accommodating to anyone's food allergies. He was sure to substitute anything with scallops for Valerie's food (she is allergic to scallops). This was fortunate, considering the very first thing that was going to come out was a plate of scallops.

COURSE 1
We started with an appetizer that consisted of 3 small bowls.
Bowl 1: fresh fig with a delicious sauce
Bowl 2: three small pieces of fish with a glaze
Bowl 3: a mystery that the chef called "a special surprise". Neither one of us had any idea what it was. The only guess I could come up with was some kind of brain. I was way off! After finishing the appetizer the chef came over and described to us what the mystery ingredient was; it was fish sperm. He told us a story about how when buying this delicacy during its short season, 90% of the cost of this fish is the sperm and the fish itself is actually pretty garbage and not used for much in the way of sushi.

COURSE 2
Next up, sashimi.
The sashimi plate was by far the highest quality fish I have ever eaten. It consisted of fatty tuna, salmon, yellow jack, and mackerel.

COURSE 4
The main course was 8 pieces of nigiri, served one at a time. The chef would make up 2 of them and place one each in front of us. As we ate each one, he would prepare the next, and so on. This portion was beyond comparison, from the quality and taste, to the presentation.

COURSE 5
Finally, dessert.
Dessert consisted of soft mochi in a sauce and red bean powder. You mix it all together and eat it with chopsticks. It tasted like a delicious candy bar!

The chef really made this experience special. He would engage us in conversation and tell us great stories about the food itself or the surrounding area throughout the meal. Always showing up to talk at the most perfect times. One cool story was that of Steve Jobs coming to visit and eating at the restaurant whenever he was in Kyoto. There was a hand written message signed by Steve on the wall. (Photos below)

Sharing this experience with my wife was beyond comparison! I will never forget it! 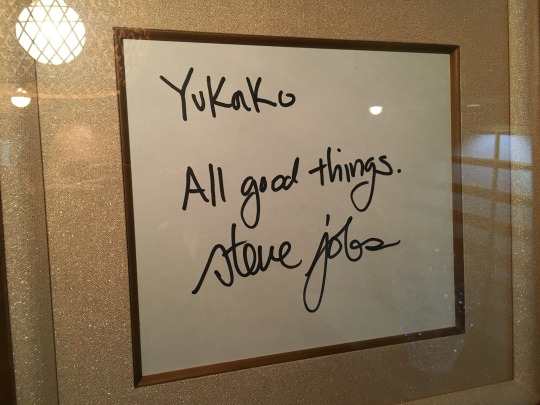 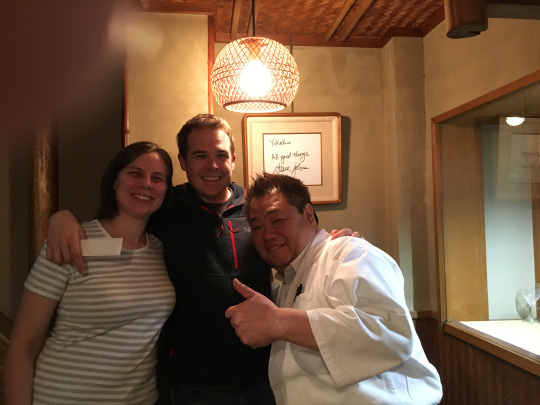 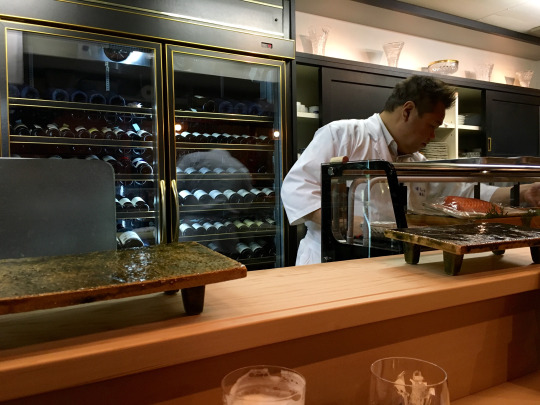